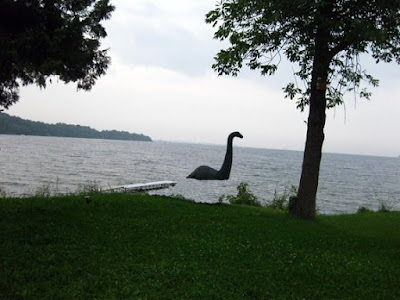 Pic of Champ in Lake Champlain...at least, that's what was stated.

Hi Title Magicians, I don't know what it is about Nessie and Lake Monsters that is so intriguing to me, and to many of us... okay, I think Nessie is adorable, and she's got that mystery dinosaur thing going on...and what the heck are all those monsters doing in lots of lakes--like Champ in Lake Champlain...really! All those folks aren't imagining these monsters...they aren't all drugged and/or drunk...no, people are seeing some animal that is monstrous and unexplainable. LONG LIVE NESSIE AND CHAMP AND ALL THE LAKE MONSTERS...that is, the ones who aren't dining on us humans.

Okay, David Adair is one more-than-fascinating man!!! He's touched a genuine ET ship while at Area 51. Beyond his fantastically amazing life and achievements, David has now taken up the challenge of hardening our electrical grid against an EMP attack or a CME from the sun... because if the grid goes down, we go down as a civilization... because most likely the *powers that be* won't let the ***available*** advanced tech save most of the population, even though, imo, the cell towers could transmit electrical power ... or transmit some form of Tesla-type energy that would power up our grid. No, the evil ones running our world want most of us dead, as in deceased. In truth, I don't think that outcome will be allowed to happen. HOWEVER, it would just be smart to harden our country's electrical grid, and it doesn't even cost that much--not to mention it would mean jobs, thus helping the economy.

Lastly, Robert W. Sullivan IV...he's a fount of fabtastic information about occult symbolism in the movies... the type of mysterious, often unknown and undetected symbolism, most of us NEVER learned about when we were growing up... because *THEY* didn't want us peons to know THE TRUTH about our world, and how it really functions.

Note: I still have no idea if MY SEXY SATURDAY will ever return. ~sighs~

Tales of a unidentified sea creature lurking in a North Carolina lake have been renewed following a fresh sighting of the cryptid.
An anonymous witness, who reported his sighting to the website cryptozoology.com, claims to have spotted a 'dinosaur-like creature' causing a ruckus in North Carolina's Lake Norman.
According to the observer, the mystery beast looked to be about ten feet long and was "splashing around in the water" for around a minute before disappearing back down into the water.
Unfortunately, the witness did not manage to take a photo of the creature, but his encounter is just the latest in a long line of such sightings at the man-made lake which was constructed between 1959 and 1964.
Seemingly ever since it was completed, the lake has spawned stories of a mysterious monster described variously as reminiscent of a crocodile, a serpent, or a large fish.
The mystery animal has become so notorious that, as often happens, it has been adopted as a quasi-mascot by residents of the area, who christened it the Lake Norman Monster or 'Normie' for short.
While skeptics will say that it's nearly impossible for an artificial lake to have somehow required a mysterious sea creature, especially a still-living dinosaur, witnesses say that is precisely what they saw and the experience has kept them from swimming there ever since.
Source: Charlotte Observer

David Adair is an internationally recognized expert in space technology spinoff applications for industry and commercial use. He discussed the Shield Act, legislation currently stalled in congressional sub-committee which would harden the U.S. electric grid from attack and damage from solar flares. Adair said that a solar coronal mass ejection event like one that narrowly missed the Earth on July 23rd of 2012 would kill 90-93% of the US population within a year, because of the loss of electrical power and the infrastructure that depends on it. If the charged particles had hit the Earth, Adair told George that "we wouldn’t be talking right now."
In 2013, a North Korean freighter with a load of sugar from Cuba was found smuggling two Cuban missiles through the Panama Canal. Adair claimed that, properly armed, these missiles could take out the electrical grid of the entire continental US, and that they could be launched from Mexico, where he says there is no missile defense along the U.S. border. Adair also recalled an attack on a power substation in Silicon Valley in 2013 by an apparently sophisticated group who used AK-47 assault rifles to do about $14 million worth of damage in less than an hour, and that he characterized as a possible "dry run." He encouraged listeners to write letters to the senator (Lisa Murkowski) and congressman (Greg Walden) in charge of passing the Shield Act to convince them to move forward.
Senator Lisa Murkowski
522 Hart Senate Office Building
Washington, DC 20510
(202) 224-6665
Congressman Greg Walden
2185 Rayburn Office Building
Washington, DC 20515
(202) 225-6730
--------------------------
In the second half, philosopher, historian, theologian, writer, lawyer, and mason Robert W. Sullivan IV discussed his fascination with how occult symbolism is used in cinema, as well how the influence of secret societies permeates through culture. In his two books, Sullivan examines how Hollywood uses myth and symbol to reveal deeper truths and ideas from mythology and the lore of secret groups. Sullivan started off the program by stating that the cast of actors on many films are chosen by based on other features in which they have appeared and how this may amplify or comment on the role they will be playing in the new production. He believes they are all involved in "modern day mythology making," building on and repeating powerful themes that resonate with audiences.
Sullivan stated that the 2004 film "National Treasure" was a "masonic ritual onscreen," specifically the storyline that deals with the recovery of a treasure underneath the ground, just as in masonic tales of the search for the wisdom of all ages that is found in a subterranean vault. Sullivan also discussed the occult symbolism of the Stanley Kubrick movie "Eyes Wide Shut" and the meaning of the constant repetition of themes and numbers in his film, "The Shining." In answer to a listener question of why symbols are used at all, Sullivan concluded that they "are important because you can decode them and see things differently."