Fans of Regency romance will know that when a society hostess had her ball or party voted a shocking squeeze or a sad crush, that she had received the ultimate accolade. 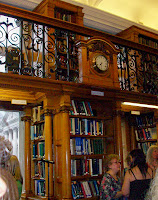 In Regency terms the Romantic Novelists' Association summer party, which took place last month, came very close. The lovely library at the Institute of Mechanical Engineers, which overlooks St James' Park in London, was packed with authors, and people from the publishing world, all celebrating the start of summer (We live in hope) and the achievement of a group of new authors from amongst the RNA membership who had achieved publication during 2008/09 and were in line for the Joan Hessayon award for the best new novel - including TM's own Helen, who was there amongst the finalists for her debut novel The Magic Knot.
Sadly Helen didn't win, that honour went to Allie Spencer with her legal rom-com Tug of Love, from Little Black Dress, but we had a good time celebrating her place in the final and drinking champagne even so -
The picture gives you an idea of what the room looked like - that's Helen in black and white in the middle. The room was so packed that my attempts to get a photo of the line up when the prize was announced are too full of the backs of other people's heads to be usable. I have to thank a tall gentleman, standing on a chair, for this one. He was doing a brisk trade as people handed him their cameras. 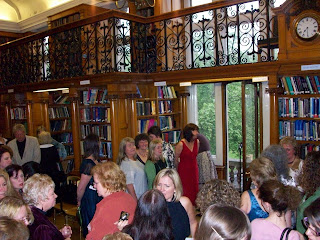 Also unveiled at the party was the anthology of romantic short stories. Loves Me, Loves Me Not which celebrates the 50th anniversary of the RNA next year.
Published by MIRA, in hardback in the autumn and paperback in spring 2010, it has a lovely cover and an even better contents. With a foreword by Katie Fforde - the new Chair of the RNA for its celebration year- and an afterword by Jill Mansell, it has stories from Nicola Cornick, Rosemary Laurie, Carole Matthews and a host of others. A real chance to sample the talent of the RNA across the board, to read in a genre you don't usually pick up and maybe find out a few new names to try. Makes a good gift too for Xmas or Mother's day.
A great time was had by all - and many congratulations to Helen for being in that very special line up - even if I don't have a picture.

Email ThisBlogThis!Share to TwitterShare to FacebookShare to Pinterest
Labels: Loves Me, Loves Me Not, RNA, the magic knot, Tug of Love
Newer Posts Older Posts Home
Subscribe to: Posts (Atom)