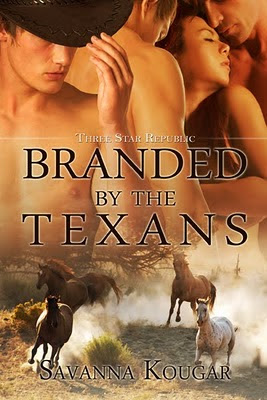 Here it is, a sneak peek of my cover art for BRANDED BY THE TEXANS, due out in August 2010 from Siren-BookStrand.

Didn’t Amanda Kelsey do a phenomenal, western-magical job? The cover just pops so beautifully and reflects an amber-hued, X-passionate scene in the story.
I feel as if I’m right there, near Pine Springs, Texas and the Guadalupe Mountain grasslands, with my heroine, Kylie, and her cowboy-rancher heroes, Dillon, Dono and Dash.

You can find Amanda at ~ http://razzdazzdesign.com ~

What can three Texans do to a woman’s body and heart?
Kylie is about to find out.
Beyond her wildest dreams.
On a parallel Earth.

It’s 2009... Kylie is on the run from the law for a crime she didn’t commit. A promising doctoral student, she’s lost everyone and almost everything, except for what she stows in her car. Now, Kylie has to salvage the rest of her life. But, where in this age of GPS tracking, TV’s Most Wanted and cameras everywhere?

It’s 2009... Dillon, Dono and Dash are three brothers desperate for a wife to brand as their own. The Union made women scarce in the Three Star Republic by releasing a bio weapons’ plague during the border wars. These tough-as-leather Texans will do anything to keep the right woman, even if they have to lasso her like a wild filly and love on her until she loves them back.
~~~~~~

HAPPILY EVER AFTER TRAILS

By Pat Cunningham
(I started this story for an anthology, then got distracted by vampires. I may finish it someday. Until then, enjoy the opening.)