("Bad Boys" is now available from Siren Classic. Boranaz the demon is determined to prove to Solian the angel that women are into the bad boys. The only speed bump to his scheme is that Boranaz wants to be into Solian. Sometimes romance can be Hell.)

Let me rephrase that. I’m not as good as I could be. That’s why I write every day, to get better. As far as technique goes, I hope it’s working. As for the plots and ideas …

I didn’t set out to deliberately write a M/M paranormal romantic comedy involving angels and demons. It just sort of happened. Specifically, I was trolling the Internet for markets and discovered a publisher wanted stories involving an angel and/or a demon. Fine, said my twisted brain. We’ll give them both. We’ll make them both male. Then we’ll ditch the chick and put the guys together. I hate my brain sometimes.

I’ve got nothing against same-sex pairings. I like a good slash story as much as the next rabid fangirl. I grew up on Star Trek, after all. As a fan of the X-Men as well, I always had my doubts about the Angel. I mean, c’mon. Blond, blue eyes, inhumanly beautiful, wings growing out of his back, calls himself Angel and he’s straight? Suuuurrrre. I still think he and Sauron would have made a cute couple. Maybe it’s a good thing I never became a comic book writer like I wanted to.

The hardest part about writing M/M? For me, it was pronouns. I had to keep using names because “he” could be either. The most fun? Picturing two smoking-hot guys going at each other. Writing is the best damn job on the planet, no foolin’.

I’ve got one other guy-on-guy tale in the pipeline and then it’s back to het. Or maybe I’ll put together all I’ve learned and write a ménage. In this job you never stop learning, and every day is a brand new adventure. I wouldn’t have it any other way.
Posted by Pat C. at 4:54:00 PM 2 comments: 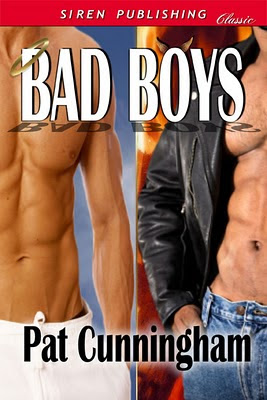 Now, those are some SEXY Bad Boys!