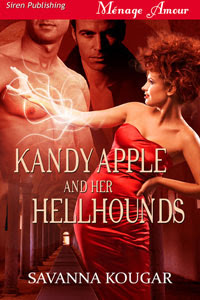 Update: KANDY APPLE AND HER HELLHOUNDS will be released as an ebook on July 12, 2011, and is available for pre-order now.
~~~

“Ready to unleash your inner being?” Zol asked his twin. Utterly naked, he pulled off his gold and onyx signet ring, twirled it once on his finger, then slid it inside his tuxedo pants pocket.

Zin stripped off his dress pants and tossed them inside their black sports car, affectionately known as the Twilight Mirage. He shut the door with a neat twist of his wrist. “I’m releasing my inner beast,” he returned with dry amusement.

Standing side by side, they traveled their supernatural gazes over the Mojave Desert’s moonlit landscape.
~~~

Have a Magickal Independence Day!